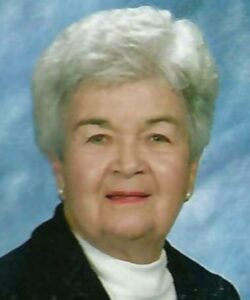 Peggy (Margaret) Whiteside Louis, 97, of New Bremen, Ohio, formerly of Washington Court House, Ohio died Wednesday, December 14, 2022, at 11:46 a.m. at the Elmwood Assisted Living Center in New Bremen where she had been residing since May. She had been in declining health two years.

Peggy was born November 23, 1925, in Clinton County, Ohio to Grant Thomas and Mary Clara Mullen Whiteside.  She grew up in Sabina, Ohio and was a graduate of Sabina High School. During World War II, she met her husband, John Louis, and was married in El Paso, Texas on July 7, 1943. She traveled across the globe during his military career and settled back into Fayette County in 1969.

She is survived by her only son, David, and his wife, Luan, of New Bremen, OH; two grandchildren, Kyle (Diane) of Seattle, WA, and Juliet of Columbus, OH and a great-granddaughter, Charlotte, of Seattle, WA.

The funeral will be Wednesday, December 21, 2022, at 1 p.m. at the Kirkpatrick Funeral Home in Washington Court House with Mell Wickensimer, director of visitation at the Grace United Methodist Church, officiating.  Private burial will follow in the New Holland Cemetery.

Friends may call at the Kirkpatrick Funeral Home in Washington Court House Wednesday from 10:30 a.m. until time of the service.