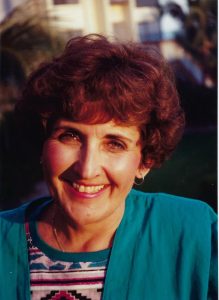 Nancy Lou French Ward, 82, of Washington Court House, Ohio died Wednesday, March 9, 2022, at the First Community Village in Columbus where she had been residing the past four years.

Nancy was born June 1, 1939, in New Holland, Ohio to Darrell Chase and Jean Benham French.  She grew up in Wilmington, Ohio where her family owned the Murphy-Benham Hardware.  She was a graduate of Wilmington High School and attended Stephens College before graduating from The Ohio State University with a degree in education.

Nancy loved to have dinner parties with friends, play tennis and bridge, was an avid reader, and was very engaged in the community.  She was a proud and active member of St. Colman of Cloyne Catholic Church and the St. Vincent de Paul Society.  She loved to sing in the St. Colman choir.  Nancy had served on the Washington City School Board of Education.  She was a member of Phi Beta Psi Sorority, where she was very involved with the Antique Show.  If you were looking for a volunteer for a community project, you only had to call Nancy and she would be right there.  She loved to travel and was lucky to have visited so many places in the world, enjoying her time in Europe and especially England.  She also helped design and decorate two new-build homes and loved to help others with design.  Nancy also enjoyed trading in the stock market and was a dedicated Buckeyes fan and a huge supporter of the Cincinnati Bengals (Who-Dey!).  Nancy loved to dance and to sing and was always at home on the stage.

Nancy was preceded in death by her loving husband, James F. Ward on November 7, 2016.  Their love story began in Westport, Connecticut when Nancy was a young teacher and Jim, who was raised there, lived next door.  Nancy and Jim were married on August 17, 1963, in Wilmington, Ohio.  They went on to live in Wilmington, Cincinnati, West Palm Beach, FL, Cupertino, CA, and finally settled in Washington Court House, Ohio in 1971, where they together owned and operated French Hardware.  Nancy had also been a teacher at the Sunnyside School where she enjoyed working with her students very much.

In addition to her husband, Nancy was preceded in death by an infant son, James F. Ward, Jr.; her parents; a brother, John C. (Jack) French; and a nephew, Rob French.

The funeral mass will be celebrated Saturday, March 12, 2022, at 11 a.m. at the St. Colman of Cloyne Catholic Church, 219 South North Street, Washington Court House, Ohio by the Rev. Father Cyrus Haddad, pastor at the church.  Burial will follow in the Sugar Grove Cemetery in Wilmington, Ohio.

Friends may call at the Kirkpatrick Funeral Home in Washington Court House Friday from 4-6 p.m. where a Rosary service will be held Friday at 6 p.m.