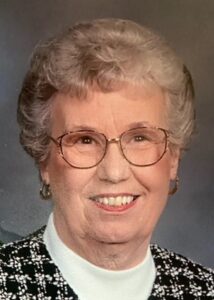 Janet Louise Kelley, 94, of Washington Court House, Ohio died Saturday, December 24, 2022, at 1:14 a.m. at Court House Manor Nursing Home where she had been residing since 2014.  She had been declining several years but had been extremely ill since November.

Janet was born May 16, 1928, in Washington Court House, Ohio to Everett Earl and Geneva Mae Swisshelm Hodson.  She was a 1946 graduate of Washington High School and was a lifelong resident of this community.

She met and married her beloved husband, Ivan G. Kelley, on June 1, 1946. He preceded her in death on January 3, 1981.  She was also preceded by her brother, Richard Hodson and brother and sister-in-law, Gene and Shirley Minshall.

She was a clerk for the Fayette County Clerk of Courts for 25 years before her retirement in 1988.

Janet was a member of the First Baptist Church where she enjoyed singing in the choir and was active in all activities in her church.  At church potlucks, and all family gatherings, all would race quickly to the front of the line to get a spoonful of her famous potato salad or a piece of her freshly-baked butterscotch pie.  Those recipes will be passed to future generations of the Kelley family!

The funeral will be Wednesday, December 28, 2022, at 1 p.m. at the Kirkpatrick Funeral Home in Washington Court House with Todd Maurer, minister of senior ministries at Southside Church of Christ and a longtime friend of the family, officiating.  Burial will follow in Washington Cemetery.

Friends may call at the funeral home from 12 p.m. (noon) Wednesday until time of the service.