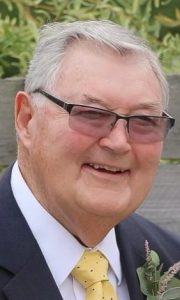 Ronald Dean Ratliff, 80, of Greenfield, Ohio died Friday, January 28, 2022, at 4:52 p.m. at the Adena Regional Medical Center in Chillicothe where he had been a patient since January 16.  He had been in failing health.

Ron was born September 17, 1941, in Stark County, Ohio to Chester Courtney and Doris Elizabeth Blatt Ratliff.  He was a 1959 graduate of Frankfort High School and attended Iowa State University where he played on the football team and was a member of Phi Kappa Psi fraternity.  He was a graduate of Morehead State College where he was a member of the Campus Club and also played football.   Following graduation from college, he was an industrial arts teacher and football coach, for one year, at Washington High School.  He lived most of his life in Ross and Fayette Counties.

He was a lifelong farmer and specialized in farm real estate appraisals.  He was president of the Federal Land Bank Association in Washington Court House before retiring in 1980, after fifteen years of service.

Ron was a member of the Pisgah-Mount Pleasant Community Church; the American Association of Farm Managers and Rural Appraisers; the Farm Bureau; PACI and the Ohio Top Farmers.  He was an original member of the Fayette County Memorial Hospital Foundation and later the Adena Fayette Medical Center Foundation of which he was a past treasurer and currently was serving as president.  He was a member and past president of the Washington Rotary Club and a trustee of the Hughey Trust.

He was preceded in death by his parents and a brother, Victor Ratliff.

The funeral will be Wednesday, February 2, 2022, at 1:30 p.m. at the Kirkpatrick Funeral Home in Washington Court House with the Rev. Larry Snodgrass, pastor at the Pisgah-Mount Pleasant Community Church, officiating.  Burial will follow in Greenlawn Cemetery in Frankfort.

Friends may call at the funeral home Tuesday from 4-8 p.m. and one hour prior to the service on Wednesday.