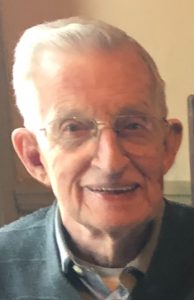 Bob was born November 29, 1930, at New Holland in Fayette County, Ohio to Clarence Leroy and Norma Marie Ater Entrekin and was reared by his mother and step-father, William Jennings Gilmerr.  He was a 1948 graduate of New Holland High School and lived most of his life in New Holland and Washington Court House.

He was a steel worker at Armco in Washington Court House for 31 years before his retirement in 1992.

Bob was a longtime, faithful member of the First Baptist Church.

On December 16, 1950, he married the former Evelyn Louise Gault.  She preceded him in death on May 23, 2018, after 67 years of marriage.  He was also preceded by a sister, Willa Jean Ater and two brothers, David  and Michael Gilmerr..

The funeral be Saturday, January 29, 2022, at 1 p.m. at the Kirkpatrick Funeral Home in Washington Court House with the Rev. Joe Current, pastor at the First Baptist Church, officiating.  Burial will follow in the Washington Cemetery.

Friends may call at the funeral home one hour prior to the service on Saturday.